In the competition of more than 80 countries from the world, AGROUNIK Ltd. is the winner of the International Leadership, Technology and Innovation Award "International star for leadership in quality Paris 2011".

The Award is awarded for business operations in compliance with the highest international standards.
Award winning criteria: good business results, customer satisfaction, planning and decision-making, human resources, production processes. The decision on the awards was made by the selection of the International Committee in Paris. 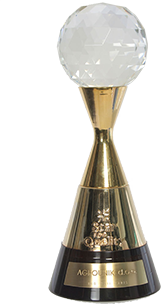 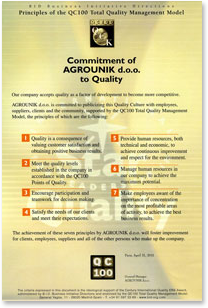 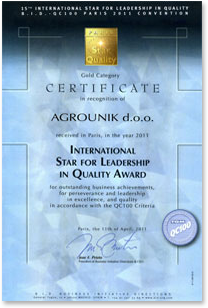 FLOWER OF SUCCESS FOR A DRAGON WOMAN

AGROUNIK Ltd. was awarded the “Captain Misa Anastasijevic” Award for the best small and medium enterprise in 2008.

This award is given every year for the contribution to the development of entrepreneurial culture and creativity. The “Captain Misa Anastasijevic” Award is awarded by the Serbian Chamber of Commerce, Faculty of Technical Sciences in Novi Sad and the Media Invent Company. 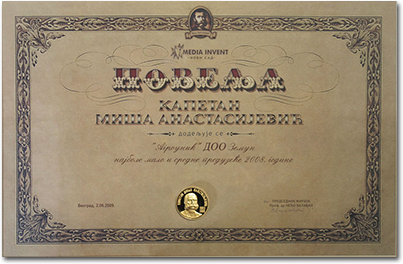 AGROUNIK Ltd. was pronounced best small and medium enterprise, and Prof. dr Snezana Djordjevic for the entrepreneur of the year 2008. The Award is given by one of the newspapers with highest circulation – “Blic” and the Intesa Bank. The award began to be awarded in 2007 and the organizer’s idea is to encourage the entrepreneurial spirit and provide small enterprises with space to show their results.  In an effort to improve the business climate for entrepreneurs, the project was supported by the Ministry of Economy and Finance, Serbia Investment and Export Promotion Agency (SIEPA), Serbian Chamber of Commerce and the National Employment Service. 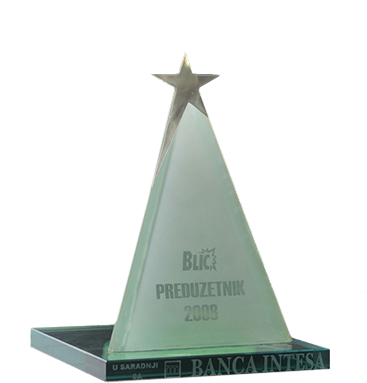 At the international exhibition of discoveries in Hungary “IDEA” 2005, prof. dr Snežana Đorđević is a winner of the Innovation Award for the SLAVOL recipe.
The exhibition is organized by the Association “Idea – Club 13” ifrom Hungary, and it is one of the significant international events in this field. 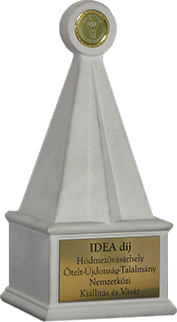 For the Slavol recipe, Prof. dr Snezana Djordjevic is the winner of the innovation award at the International Fair of Innovations, Research and New Technologies.  She was awarded this recognition in 2005. The Brussels Eureka is the most significant fair event in this field.

The award at the very beginning of Slavol production shows that this fertilizer’s unique formula has been recognized from the start as a new dimension in fertilization not only in Serbia but worldwide. 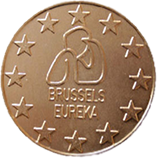 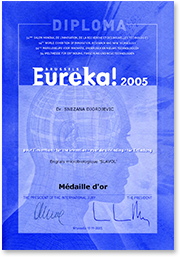 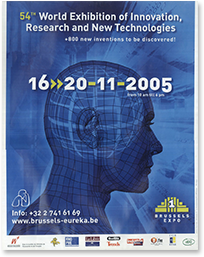 For the production of microbiological fertilizer SLAVOL, AGROUNIK Ltd. is the winner of the Gold Medal at the Novi Sad Fair. The award was received in 2004 at the International Entrepreneurship Fair.

From the very beginning of SLAVOL production, quality of this fertilizer has been recognized as a new dimension in fertilization. With its product, AGROUNIK Ltd. has proved that it is possible to translate scientific work into a product and then place it to the market in a successful way. The Award at the International Entrepreneurship Fair at Novi Sad Fair is just a confirmation that AGROUNIK Ltd. has been on the right track from the very beginning. 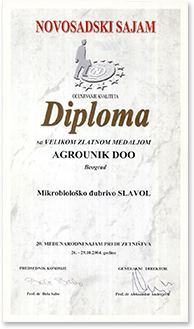 Prof. dr Snezana Djordjevic, who has composed the recipe for natural microbiological fertilizer SLAVOL, is the winner of the silver plaque at the International Innovation, Knowledge and Creativity Fair “Tesla Fest” in 2004.

The silver plaque at this event bearing the name of one of the most popular world inventor – Nikola Tesla confirms that SLAVOL is a real patent with its specific formula.
Organizer of the “Tesla Fest” is the Inventors Association of Serbia. More than 300 exhibitors from various European countries take part at this event every year.